wildfife Mainly about the wild flowers of Fife

I guess I’m going to be very familiar with all the paths round Cupar by the time the lockdown is over. For today’s exercise, I walked through the park beside the Eden (busy with dog walkers) then along to the Trading Estate, deserted, where there is some wonderful moss.

As the main road was so much quieter than usual, I went on then took the track down towards Dairsie Bridge. A new one for me. I didn’t go all the way to the bridge because my leg was sore, but maybe another day.

The track had daffodils, celandines and scillas among the trees. Chaffinches and yellowhammer in the branches. At the road end, I found this solitary crocus.

I went up Foxton Farm road, pondering over the white blossom on the hedge – Blackthorn or Cherry Plum? Should have taken a picture, but I wasn’t meaning to do a blog.

Walking back along the field track to Cupar, I took a picture of this red dead-nettle for wildflowerhour, and listened to skylarks all around.

Further on, there was another good “wall plant” photo opportunity, with dandelion, prickly sow thistle and hairy bittercress all together.

A wren hopped up on top of the wall and sang loudly. Further down the lane, the dunnocks were also singing from the top of the hedge. When I was nearly home, I found this cobblestone grid of Whitlowgrass, Erophila verna, which I’d never noticed before.

I made sure I went somewhere quiet today, but have a feeling this was probably the last outing for a while. Along at Leslie, I followed the path by the river Leven. Gave up the path to Auchmuir Bridge because of impassable mud, but found another route which turned into a circular walk in lovely countryside.

The river was lower than a few weeks ago, but still rushing along, lots of noise and movement. 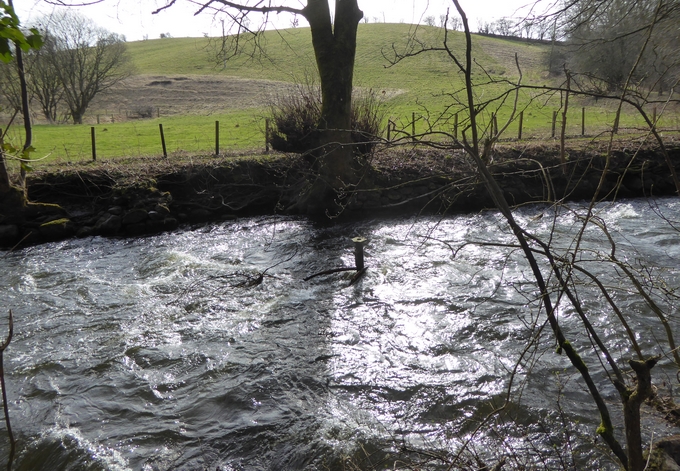 There weren’t many flowers, but lots of fresh young leaves. Think these ones are Arum maculatum, Lords and Ladies. 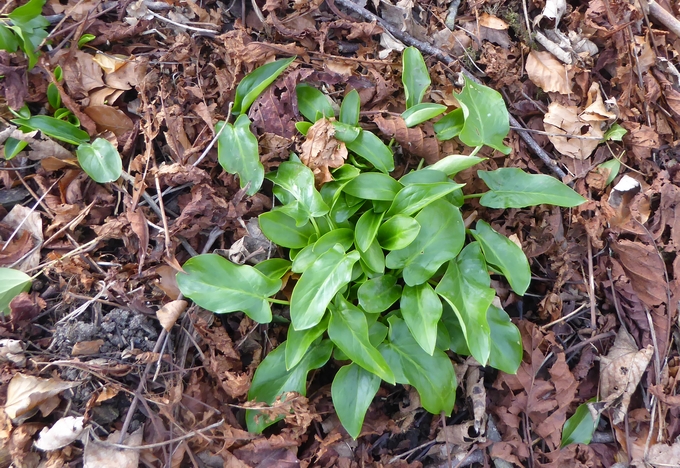 There was a good spread of young garlic leaves by the river.

On the ground, still some scarlet Elfcups, but looking a bit battered.

I passed by a farm with a garden which was half submerged – not sure what happened there, but I’ve never seen anything like it. The farmyard (dry) had these lovely coltsfoot.

Finally, a picture of the amazing shaking bush from a couple of weeks ago – now only the smallest tremors as the river is so much calmer. 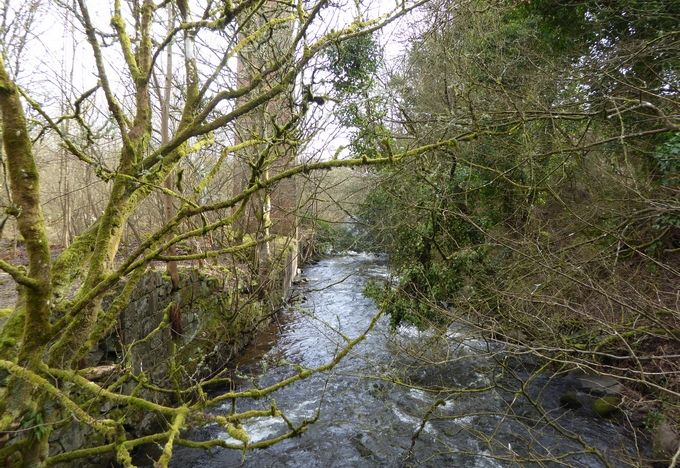 Business as usual in Kenly Den

It was a beautiful sunny morning and for once there was no howling gale. We walked down to the sea from Boarhills and it was so heartening to see all the spring flowers coming out, just as they should be. With most of them, it was the first time this year that I’ve seen them.

The first delight was Wood Anemone. 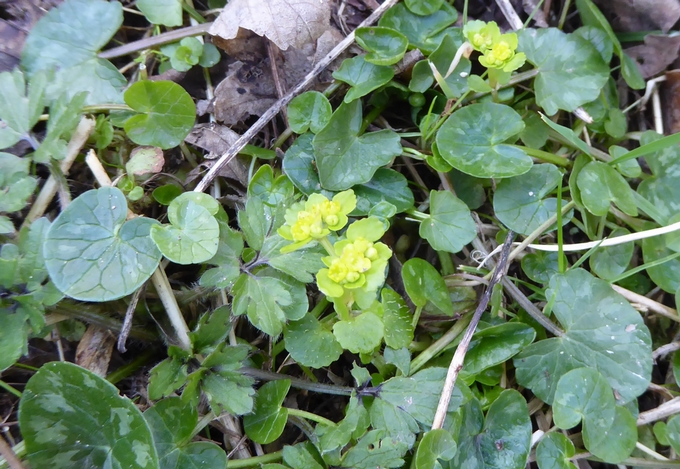 The male flowers of Dog’s Mercury.

Down at the sea, the first Scurvygrass flowers. 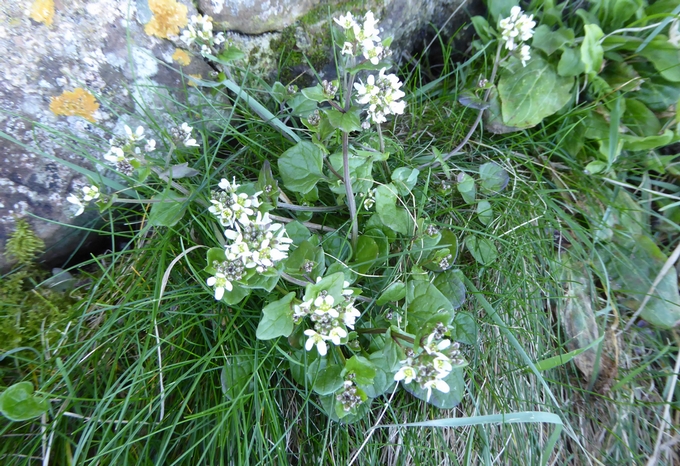 I wish I’d taken a picture of the sea, which was so clear and blue and sparkling.

Afterwards, I went down to St A and had a look at the birds. I liked the ripples these ducks were making.

The pavement plants are superb just now. I loved these little white Whitlow Grass flowers among the cobbles in North Street. 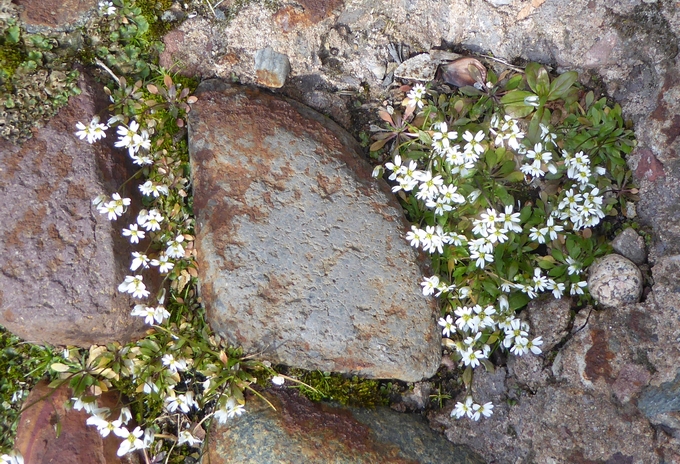 But the star of the show was the Rue-leaved Saxifrage, in flower. This picture makes me feel dizzy… 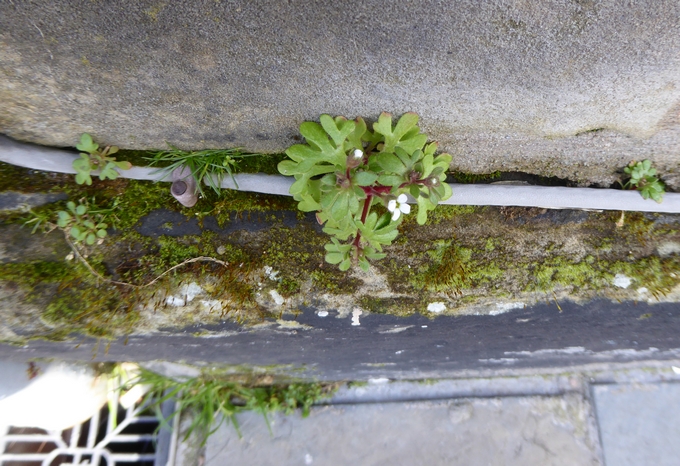 What a difference a day makes

The day before my trip to Inveralmond (blogs in wrong order), I did a short moss-collecting walk up at Hill of Tarvit.

The wind was cold and a little sleety shower blew over. However, the snowdrops were still looking good.

And the line of trees along the hill was showing that hazy spring-time colour at the tips.

The moss was looking good (I think March must be peak time for moss beauty, which is something to say for this miserable month). Green grape capsules of Bryum capillare. 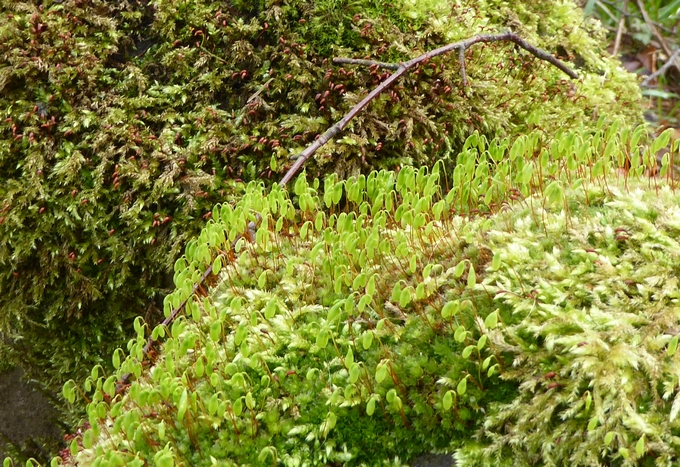 And a beautiful mixed moss garden on this stone.

There’s always something to be seen even on unpromising I-hate-March sort of days. 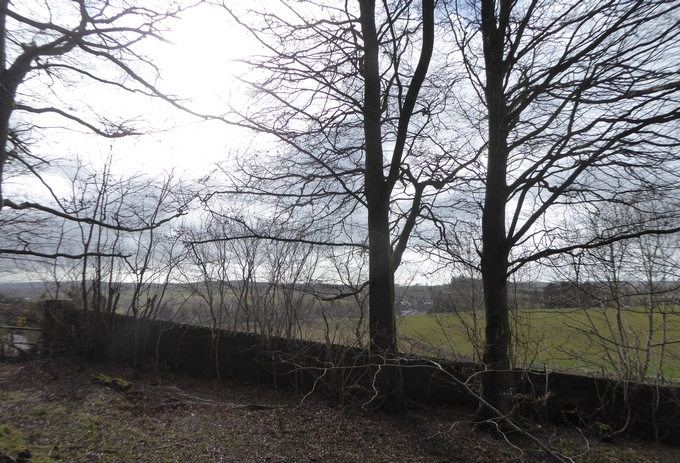 For several years I’ve wanted to find the Yellow Star of Bethlehem, Gagea lutea. There have been a few unsuccessful attempts (e.g. the abundant 19th century colony at Logie is no longer there) but Margaret told me about a fairly recent record from the Perth Nats at Inveralmond. As flowering seems to be early this year, I went off to have a look.

I walked up the Tay from North Inch, not a walk I’ve done before. It was good to see lots of people out enjoying the weather, and most of the dogs were well behaved. I passed the flooded golf course.

Circular ripples looked like rain drops but must have been escaping air coming up from below?

Along at Scone Palace, there were groups of birds at the water’s edge – cormorant, oyster catcher, gulls and wigeon. I decided these were Lesser Black-backed gulls, as there was a glimpse of yellow leg and they just didn’t look big and black enough to be the Greater. 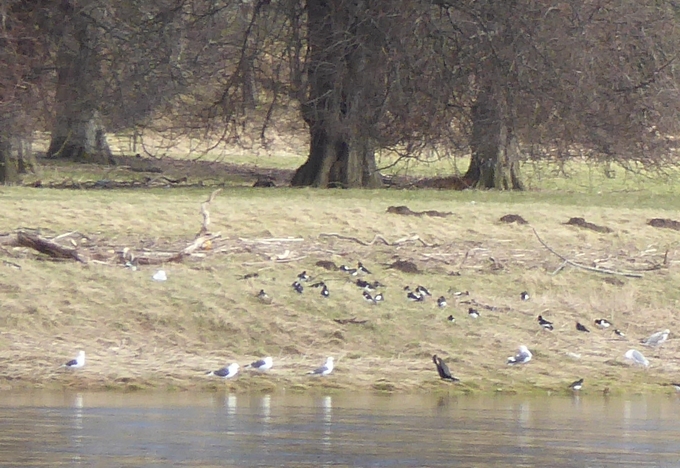 There were pussy willows just beginning to emerge. 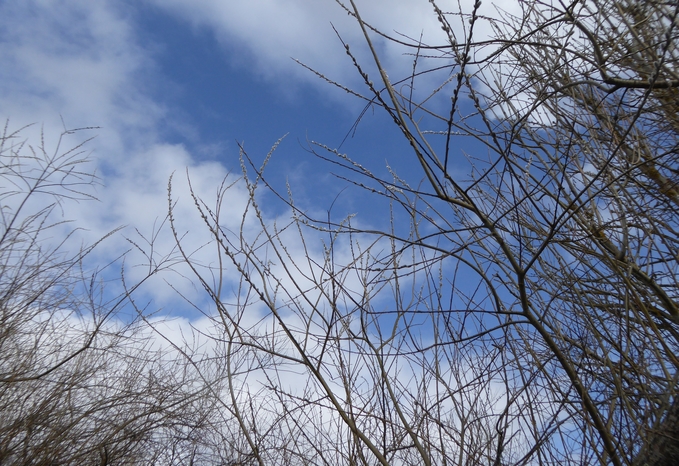 I found my way to the Inveralmond bridge, and pondered over these leaves – Gagea lutea or baby bluebells? 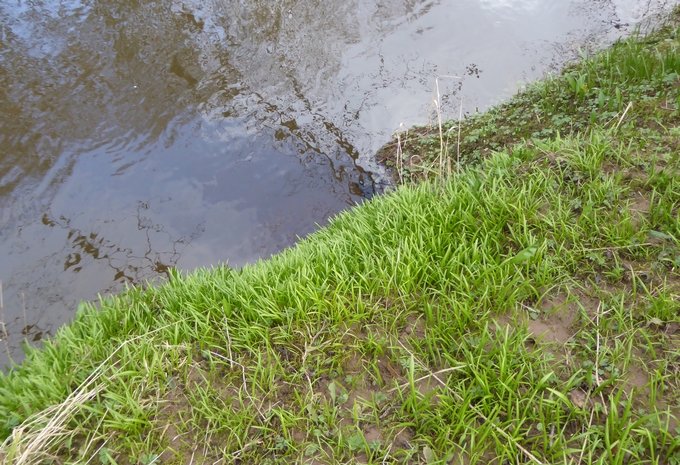 After checking out the M&S foodhall, I started back. I went down to the river to admire a grey wagtail. And it was just a few yards further along when I saw the first glimpse of yellow… 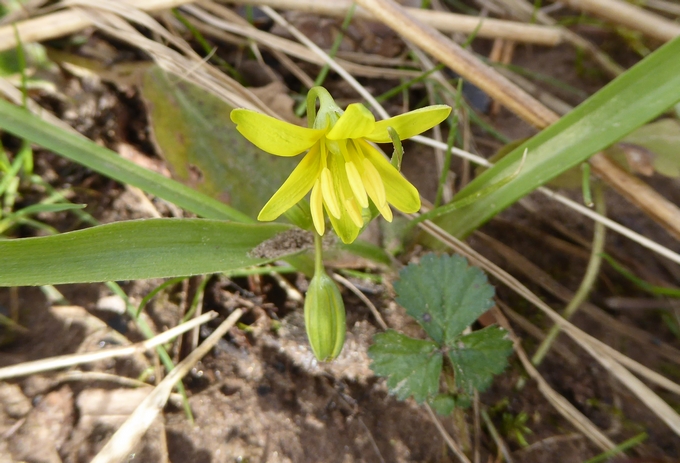 There were only 3 or 4 in bloom, so I might go back with the Plant Ladies later. But what a lovely delicate little flower it is, with very subtle green marking on the back of the petals.

I also checked around Niel Gow’s oak at Dunkeld – again there were lots of leaves which might or might not be Gagea, but no flowers to be seen. However, Town Hall Clock, Adoxa moschatelina, was just beginning to come out.

Although I was trying not to think about moss, there were some spectacular bryophytes, including this stand of Plagiochila. 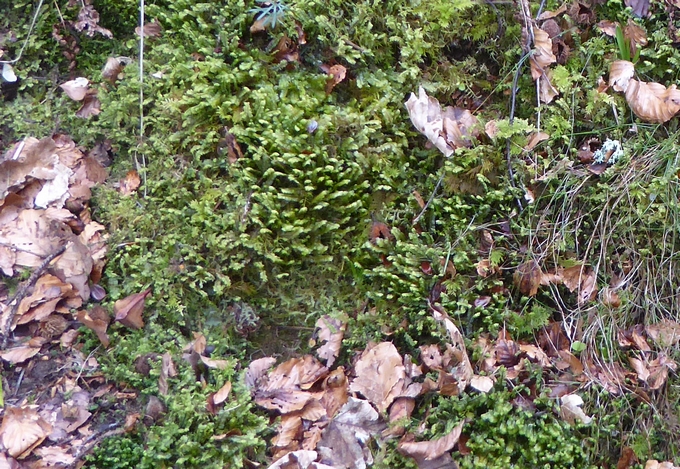 And this lacy purple liverwort on a beech trunk.

And this carpet of Ceratodon purpurea. 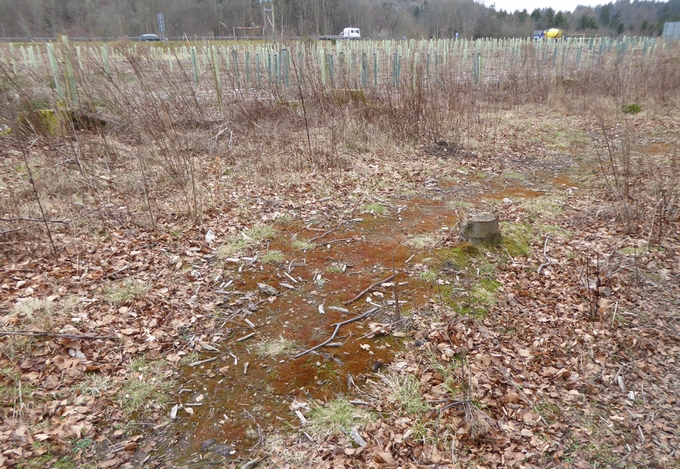 But there was no doubt about today’s star.

Geese and other things

I took a little walk up the side of the Eden at Guardbridge on this beautiful sunny morning, and the first bird I was was the Little Egret. Still such a treat to see it, even though it’s now a regular at the estuary.

I could hear geese, and then saw them, hundreds, camped in the field across the river. Just too far for comfort with the binoculars. I tried some long-range photos.

I think these are Pink-footed Geese – the colouring and the “wink wink” sound. 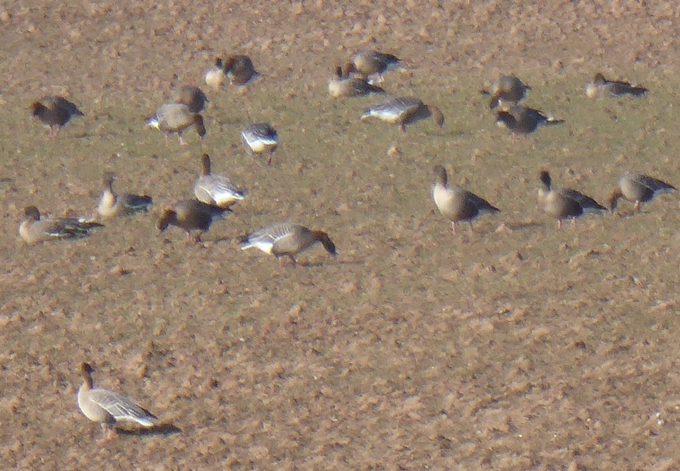 Something scared them, and they all took to the air. 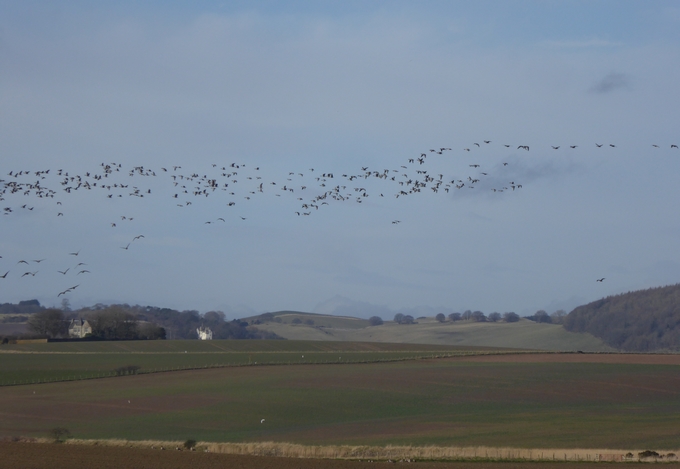 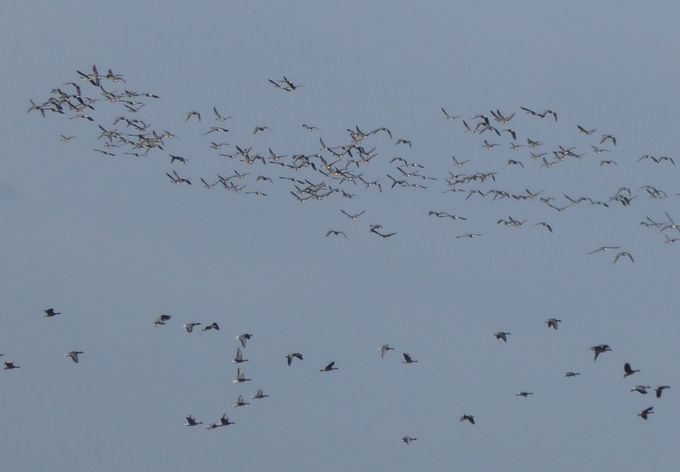 Beautiful sight. Flower-wise, I only found a single Celandine, but the Scurvy Grass is nearly out. Oh, and how could I forget the gorse blooming in the sun, with a matching Yellowhammer on top?

And a Flowering Currant, a lovely sign of spring.

There was also an invisible Reed Bunting (one, two three…one, two, threefour), a tree full of Linnets, Redshanks among the gulls and oystercatchers on the mud, and a last look at the Little Egret.

Or Drumcarro craig as Charles Howie knew it.

It was sunny and much, much less windy and a good day to be out there. Very cold though – some of the mosses were frozen solid, but at least this helped with the mud. A drip had encased these grasses in ice.

I found a single primrose, but it wasn’t open yet so no picture. But there was a wild thyme plant in flower, a very welcome sight.

The Polytrichum piliferum added colour, with its red ‘flowers’.

Even when I don’t know what they are (i.e. most of the time), I do love the way mosses look.

The views from the top were wonderful. 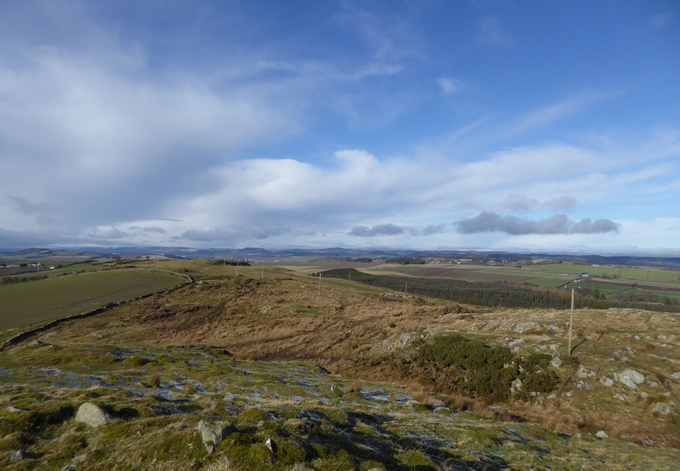 I also took a picture of Cassindonald bog completely flooded.

Skylarks were singing. I lasted about an hour and a half before the cold wind got too much.

I went down to the Eden walk to have a look at moss, but the path was flooded. 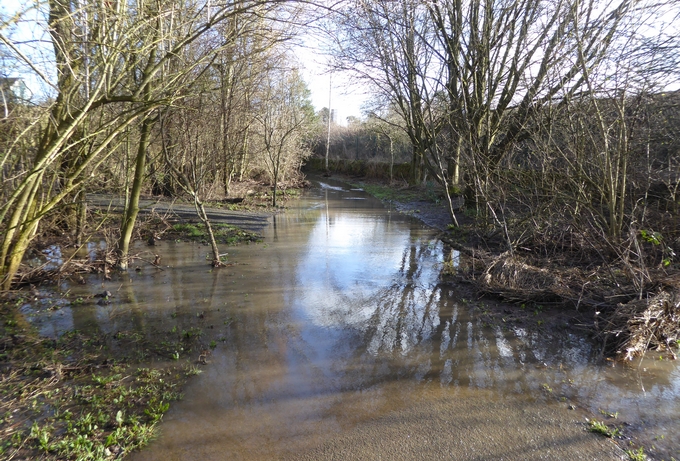 The boggy area which was dry but full of reeds in the summer is now completely under water.

A lady told me that the water had been much higher yesterday, covering most of the path up to the entrance.

Coming back, I saw a cormorant beside the burn at Moat Hill – first time for that – but I would have thought the burn was too fast for fishing just now. 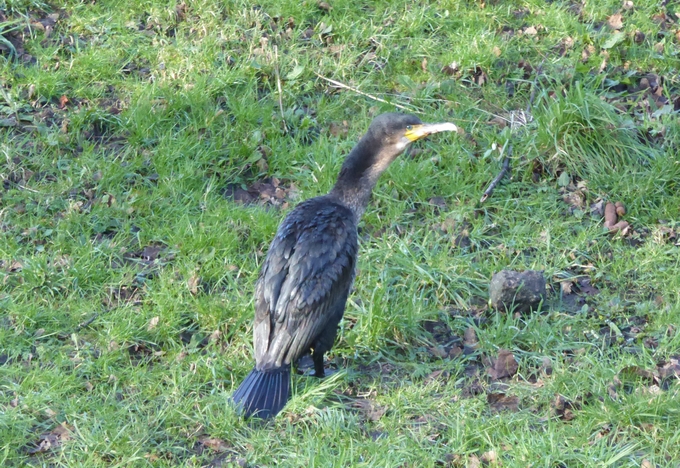 So much for a nice sunny winter’s walk…

At least there were lots of beautiful big snowdrops at Kenly Den.

It was still blowing strongly, but sunny and I went down to Elie to have another look at a mystery moss.

The stones at the beginning of the beach are all uncovered, and I don’t remember these large boulders?

The waves had been right up to the banking, and had left a mixture of gravel and sand behind. (Nice and easy to walk on.)

I loved the way the wind had splattered sand against the boulders, and piled up smooth mounds against them.

More pristine sand later on – before I walked on it. 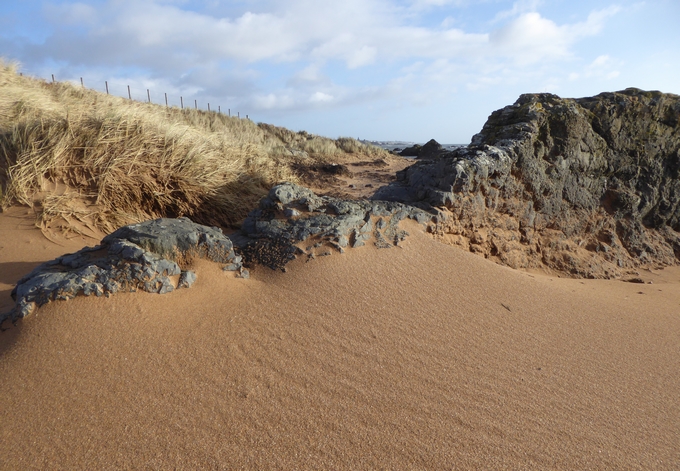 There were lots of oystercatchers and some redshanks, but it wasn’t a day for birdwatching with binoculars. There was a little pipit-type bird not at all pleased to see me – it did a sideways dance along the shore.

Then I found my first Coltsfoot of the year. And it would never have been photographed if it hadn’t been the first, poor muddy squished thing. But a sign of better things to come. 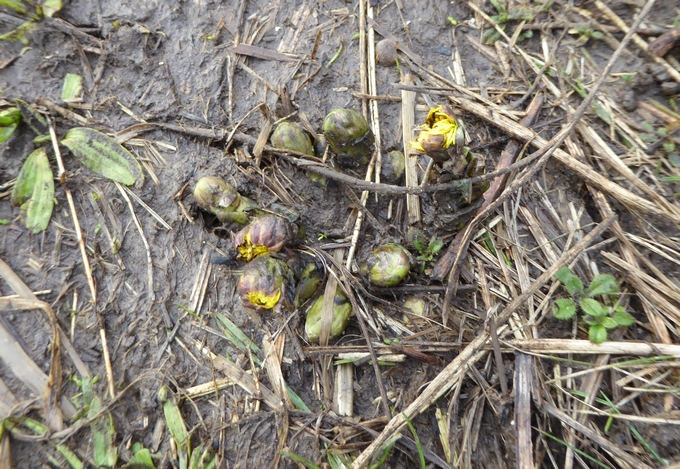 The snowdrops are still cascading down the cliff, and it still looks odd to me.

The mystery moss was looking beautiful. Like a green velvet brain. Or something. 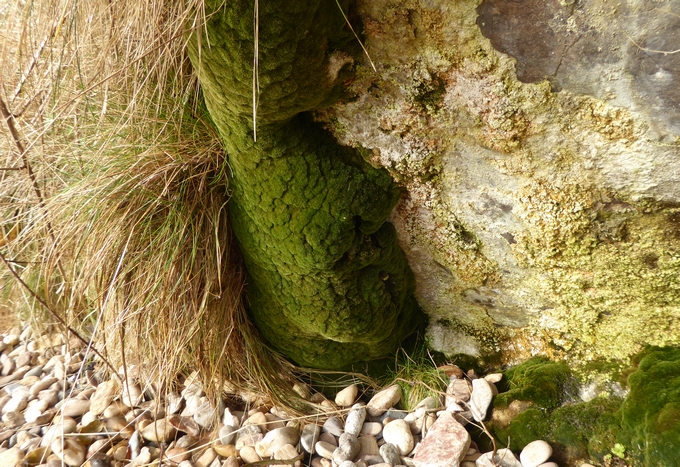 Coming back was much harder going, with the wind (and sometimes rain) in my face, but it was lovely to find this Celandine – the first this year apart from the Lade Braes one. Blowing all over the place, so it was difficult to get a sharp picture.

Finally, the sea turtle came into view. Or is it a snail? 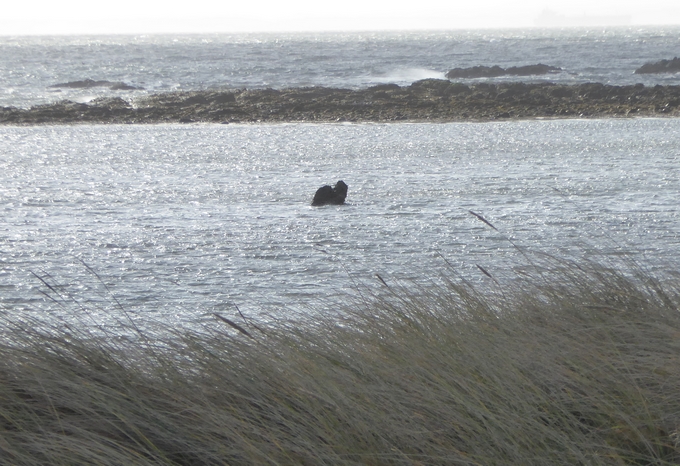